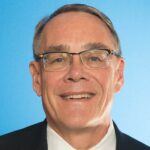 In Memoriam: B. Curtis Wilkinson

The firm mourns the unexpected death of partner, B. Curtis Wilkinson, who died on September 17, 2022. He was 75. Curt came to this law firm as a summer clerk while in law school and began his career 50 years ago as an associate. He never practiced the profession anywhere else, and he was intensely proud to have been a lawyer for five decades.

Curt had chaired our partnership meetings since 1997.  Throughout his career, he was driven by an intense work ethic and fierce loyalty to clients and their interests.  He did so with great personal integrity.  For more than 30 years he was primary counsel for Union Hospital, an engagement he enjoyed very much.  He was as well known among Union management and staff as he was at his own law firm–he even had an office there to accommodate the many meetings and events he attended each week.  Throughout his career, Curt was a lawyer who arrived early and stayed late.  He was a capable lawyer, loyal partner, and good friend for all of us.

Born in Pomona, California, on July 29, 1947, Curt spent most of his youth in Linton, Indiana, and graduated from Linton-Stockton High School.  He was active in Scouting and earned both  Eagle Scout and the Order of the Arrow, along with its highest award, the Vigil Honor.  He was awarded a baccalaureate degree at Indiana State University in 1969 and enrolled in Indiana University’s Maurer School of Law at Bloomington from which he was graduated, with distinction, in 1972.

His early law career focused on litigation and general corporate representation.  In the mid-1980s, Curt was engaged by Union Hospital to serve as its primary legal counsel, a representation that continued for the remainder of his career.  During a time of substantial change of health care law, he was an adviser and counselor on a wide range of issues and was involved in the creation of Union Health System and the construction of a new acute care hospital.

Because of his interest and expertise in health care law, Curt served on the boards of the Visiting Nurses Association and Hospice of the Wabash Valley (also assisting in their ultimate merger) as well as board service of the former St. Ann’s Clinic (Wabash Valley Health Center) and Providence Health Care, Inc.  He also served as board member and board chair for both the Indiana State University Foundation and the Greater Terre Haute Chamber of Commerce.  In recent years, he was appointed by Gov. Eric Holcomb to the State Employee Appeals Commission.  He was a former President of the Terre Haute Bar Association and served on the board and as President of the Country Club of Terre Haute.  He was a director of Templeton Coal, Inc., at the time of his death.  He was a member of the Strawberry Hill Cannoneers.

Curt and his wife, Leslie, raised two children in Terre Haute and took pride in their academic achievements, careers, and families.  Family time, especially with the addition of grandchildren, was of great importance.  He was devoted to many pets over the years.  He is loved and missed dearly by Gus and Blue, his faithful canine companions.

He is survived by his wife, Leslie, his daughter, Molly Chavers and her husband, Adam Chavers, of Indianapolis; his son, John C. Wilkinson, and his wife, Christine Wilkinson, of Alexandria, VA; three grandchildren, Jackson Wilkinson, Weezie Chavers, and Rylee Wilkinson; his sister, Carol Jacobs, of Cincinnati; and in-law family, Gail Schultz and Jeff and Suzanne Krieble, of Terre Haute, Brent Krieble, of Bloomington, and Barry Krieble and Machelle Lamonaca, of Tuscon, AZ.  He is also survived by many nieces, nephews, cousins, friends, and colleagues.